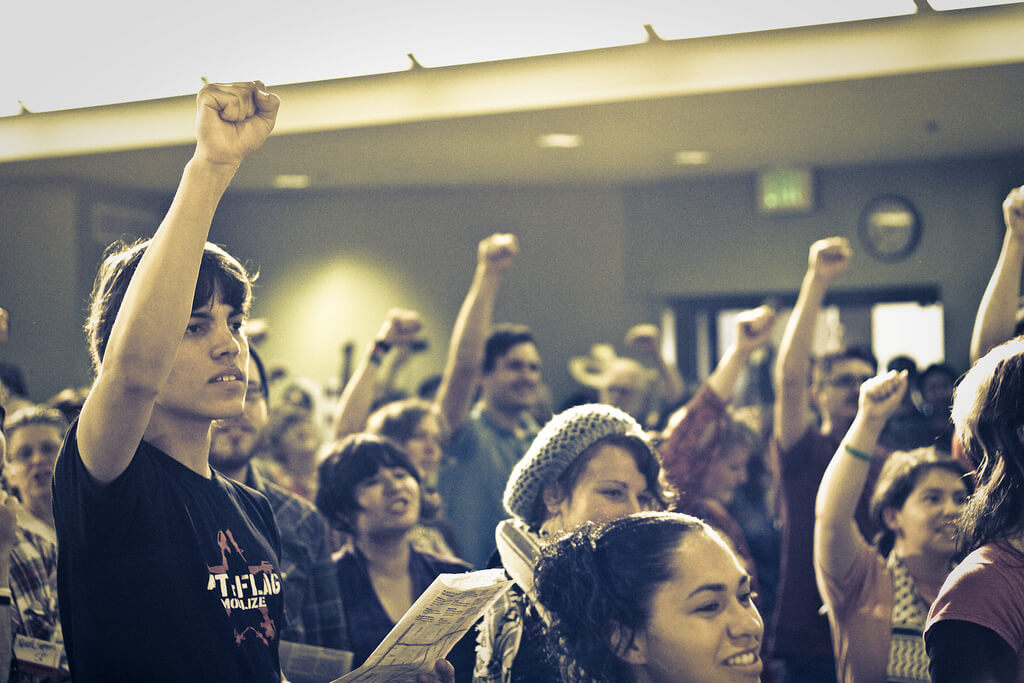 The Socialism Conference took place from July 5 to 8 in Chicago, Illinois. Organised by The International Socialist Organisation (ISO), the annual conference was co-sponsored by Jacobin for the second year in a row. Around 2000 participants from all over the world, but mainly the U.S., gathered in the conference rooms of the Hyatt Regency Hotel at Dr Martin Luther King Jr. road. They discussed about topics such as Marxist Theory, Labour History, Imperialism, Immigration, Gender and Sexuality, Black Liberation and Women’s Liberation, Revolutions, Education and many more in dozens of panels.

Well-known panelists included Neil Davidson, Gilbert Achcar, Francis Fox Piven, Colin Barker, Dave Zirin, Paul D’Amato, Anand Gopal and Amy Goodman. Academics, long- time activists and young socialists discussed important questions on how to strengthen the link between political theory and political practice. At the top of the agenda were 1.) what to learn from the lessons of past revolutions, 2.) what to learn from Marxian and Marxist classics and 3.) to share ideas and tactics of how to organise various social struggles across different locations.

Several panels emphasised the necessity of recognizing and supporting diverse forms of resistance. Activists David Whitehouse and Diana Macase reminded us of South Korea’s hidden history of resistance. They highlighted how the Gwangju Uprising, also known as May 18 Democratisation Movement in 1980 became one of the most inspirational experiences in South Korea’s history of struggles. A similar approach was taken up by Kate Seidel, who raised some interesting points regarding socialist organizing in post-Soviet countries. During her stay in Russia she worked with political actors pursuing diverse political agendas and strategies. Being well aware of risking a Western-centric perspective, Kate proposed to analyse Russia’s activist landscape by distinguishing between a mythical patriotic bourgeoisie, loyal oppositions, militant liberals, socialists from below, yellow unions (i.e. company unions) and of course the Far Right, Stalinists and anarchists. Although some of the categories seem peculiar at first sight, it would be interesting to study the possible existence of similar groups in the context of other post-socialist states.

Other panels took up the question of what kind of political party should accompany a leftist social movement in general and how a vanguard party might look like in particular. Against the popular misconception of vanguard parties to be elitist, avid for power and self-proclaimed, Paul D’Amato, author of The Meaning of Marxism, argues for a different understanding. Rather than being a product of bourgeois top-down organizing, he considers it indispensable that a vanguard party would be embodied in working class structures. Relatedly, ISO member and editor of Eyewitnesses to the Russian Revolution, Todd Chretchien added that the importance of building a political party side by side with popular social movements is not only historically justified (see the Paris Commune) but essential in order to build a social base anchored in the working-class. Chretchien also discussed the role of democratic centralism and its advantages vis-a-vis pure consensus decision making processes, arguing that the former should be regarded as a means for revolutionary organizing and decision-making processes rather than a tool of suppressing minority opinions as is usually contended by critics.  While democratic centralists argue that disagreement among Party members is the basis for practicing dialectical materialism and should not be misinterpreted as political unanimity and factionalism, there are serious problems facing the practice of democratic centralism. These include the risks of developing dogmatism, deconstructive factions and lack of leadership accountability, but also ultra-democracy as a response to over-centralism.

Some contributions raised awareness about crucial historical moments, including Elizabeth Terzakis’ talk about the first year of the Russian Revolution, Colin Barker’s lecture on revolutionary rehearsals and Gilbert Achcar’s panel on the Arab Spring. Others spoke about the Egyptian Revolution and counterrevolution, the struggle against Apartheid and the Spanish Revolution.

One of the highlights was the panel discussion with 85-year old Frances Fox Piven, long-term activist and author of Who’s Afraid of Frances Fox Piven?, Regulating the Poor and Poor People’s Movements among many others. As for her panel which was titled “The importance of being unruly”, Fox Piven called on the audience to recognise that it was the social movements that radically changed the political discourses (e.g. Occupy Movement), rather than the impact of her academic writings. Dedication to participation and solidarity with the movements one is writing about, she argued, is what makes academic work on movements valuable for both scholars and activists.

Anh-Susann Pham Thi is a PhD candidate in Sociology at the University of Manchester. Her research is looking at resistance in contemporary Vietnam. Research interests include Marxist social movement theories, Eurocentrism and everyday politics in the Global South.